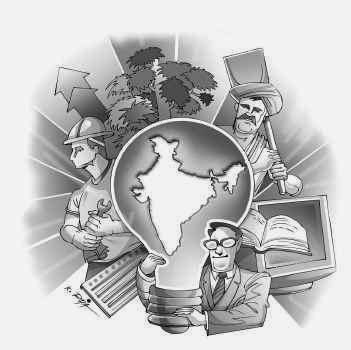 India is likely to be one of fastest-growing economies by 2020, but despite an appealing consumer base and technology sector, attracting foreign direct investment is not going to be easy.

According to Ernst & Young’s recent report on India, Investors are already very interested. It’s one of the world’s top five destinations for foreign direct investment, but experts say the country needs to enhance its business environment to really fulfill its potential.

India is the fourth-largest target for foreign direct investment.
A growing population, educated workforce and low labor costs are helpful, but a lack of infrastructure, corporate taxation and administrative difficulties make things tricky.
“The long-term outlook for India is positive, with investors expecting the country to be among the world’s top three growth economies by 2020,” reads the report’s introduction. 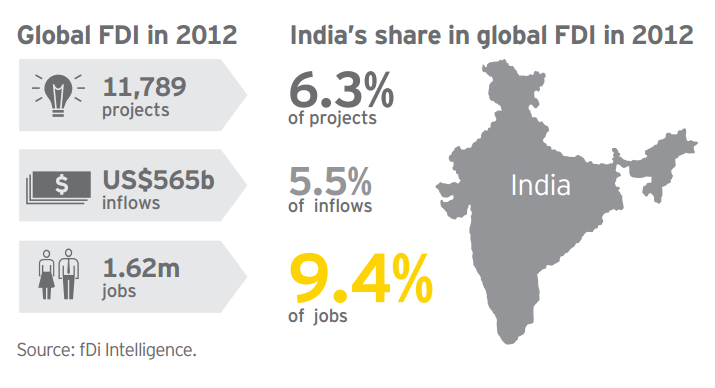 More than nine percent of jobs created by FDI in 2012 were in India.
In 2012, India saw $565 billion worth of FDI inflows, 11,789 new projects and 1.62 million new jobs.
“But for investments to materialize, the environment must be more enabling and measures on other competitive issues including currency stability and ease of doing business, must be implemented.”
Regardless, India is a country with high growth potential. Its gross domestic product per capita is expected to reach $1,916 in just two years, up from $1,472 today. 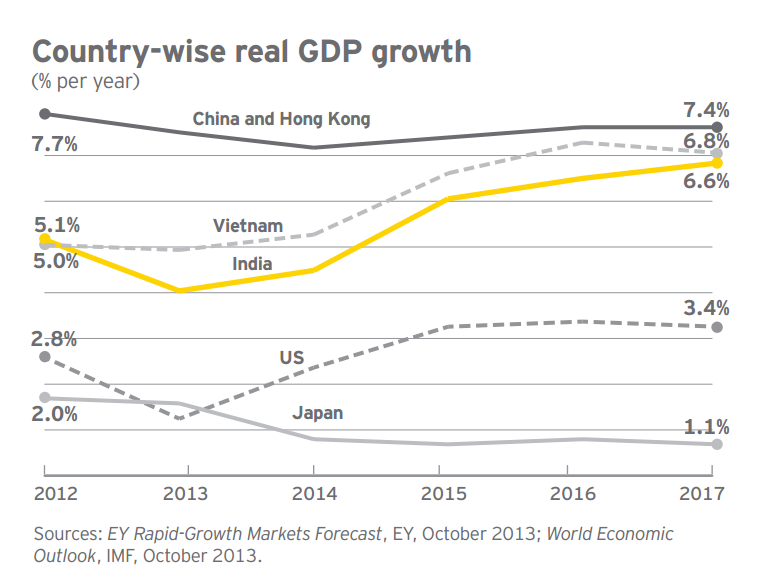 According to UNCTAD, the labor force in India will rise to 556.8 million by 2020, up from just 498.7 million today. Meanwhile, Indian hourly wages are around $3.1 – a major difference between Russia and Brazilian rates, which are just above $11.  Plus, consumer spending will hit $3.6 trillion by 2020, and the country will represent one of the world’s largest consumer markets in 2025.
Technology, Media and Telecom (TMT) was the most popular industry for investors. More than a fifth of new projects were in this field..  “Today, the majority of the Fortune 500 companies source their IT services from India,” the report reads. Despite competition from the Philippines and Vietnam India’s vast talent pool should keep this trend going.Technology is one of the fastest growing sectors for incoming FDI in India 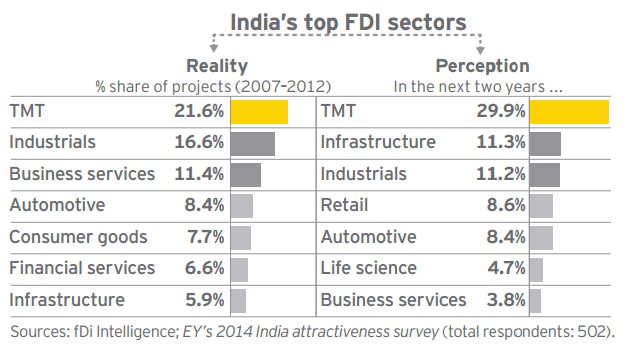