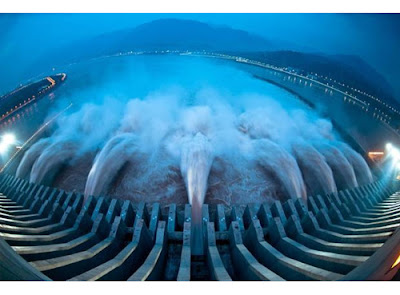 From its source on the Tibetan Plateau, the Yangtze River winds its way 3,900 miles through China and terminates near the mega-city of Shanghai. The Yangtze is one of the world’s longest, most powerful rivers. For more than 2,000 years, it has played a key role in Chinese history as a source of drinking water, a crop irrigator, and as a transportation network. Although the Yangtze has supported lives, it has ended many others. In 1931, torrential rains caused the Yangtze to flood its banks, which wiped out crops and lead to the deaths of an estimated 3.7 million people, making it one of the deadliest natural disasters in history. In 1954, another round of flooding resulted in the deaths of more than 30,000 people. In the early 1990s, the Chinese decided to harness the Yangtze with a huge dam. At over 1 mile long and almost 600 feet tall, the Three Gorges Dam is the largest hydroelectric dam on earth. It cost more than $30 billion to build and produces awesome amounts of e
Read more
More posts