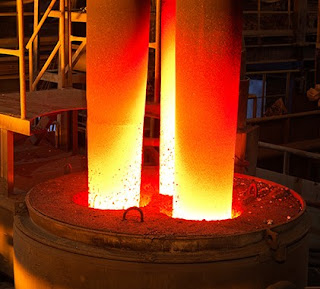 One more interesting article regarding EAF posted on a blog TELEVISORY

Graphite electrode (GE), which is primarily used in the steel production via Electronic Arc Furnace (EAF) saw a huge surge in its prices in the past 6-8 months. This was due to a sudden and unforeseen deviation in the demand-supply dynamics. In the last 4-5 years, the global GE industry reeled from over capacity. This led to a low GE prices as the demand which is dependent on steel production through EAF route was down due to slow demand growth, excessive supply from China and higher cost of EAF steel production as compared to Basic Oxygen Furnace (BOF) route.
However, the demand-supply witnessed a significant shift by June 2017, with demand exceeding the supply (mainly in China). A sudden shift in the industry’s fortune was largely driven by China’s environmental control policy, which led to a phase-out of old, less efficient and polluting units (across industries). China’s steel and GE manufacturing companies were hit by the rule and approximately 170 million tonnes of steel capacity (~15% of China’s total installed capacity) and nearly 200,000 tonnes of GE manufacturing capacity closed in 2016-17. This had a threefold impact on the global GE industry. 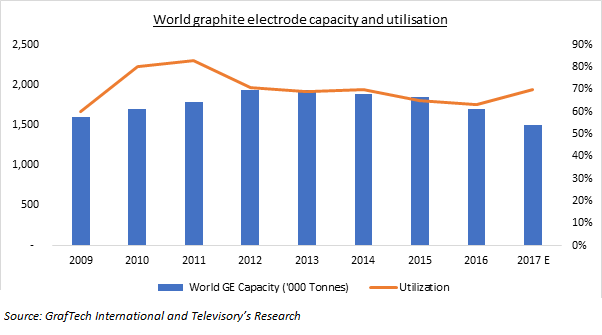 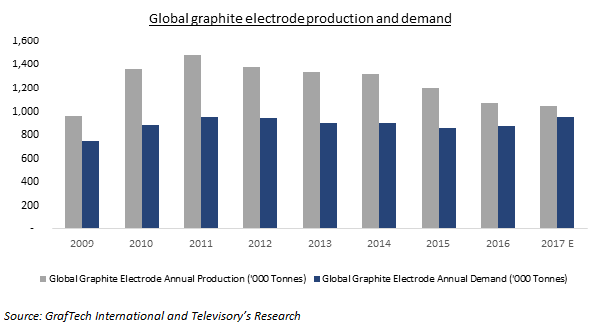 The closure of Chinese GE capacities came at a time when the global GE industry was undergoing consolidation phase and roughly 160,000 tonnes of GE capacity was shutting down across the world, (except China) in the past 3-4 years. A sudden decline in Chinese GE capacity and increased GE demand within the nation and among other countries led to a sharp surge in the Chinese non-UHP grade GE spot prices from June 2017. Though internationally GE realizations for most of the companies did not experience a similar rise as most of the GE demand-supply was pre-booked at low prices. In the past six months, the non-UHP grade GE prices increased to ~USD 16,000 from ~USD 2,000 per tonne in the Chinese spot market. In few grey markets, the spot prices reached USD 30,000 per tonne. 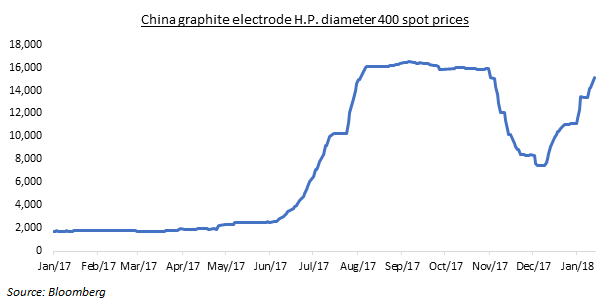 Televisory believe that the UHP grade GE prices will increase in-line with the non-UHP grade GE prices in next 6 months and then there will be a gradual decline in the prices with an increase in supply on account of increased capacity utilisation. However, the GE prices are anticipated to remain much higher than the historical levels.
The incremental GE demand (UHP and non-UHP grade) of ~150,000 tonnes from rest of the word can be easily served at the present existing capacity of ~810,000 tonnes. This can be done by increasing capacity utilisation to 90-95% from the current ~75% and changing of the UHP/non-UHP production mix. However, in order to cater to the projected increase in UHP grade GE demand from China, a fresh capacity addition would be required. According to Televisory’s estimate, China will have 200 million tonnes of EAF steel manufacturing capacity (20% of the total targeted steel capacity) by 2020, which is in-line with the domestic scrap availability of 200 million tonnes. This entails a fresh EAF capacity addition of 150 million tonnes and a consequent UHP grade GE demand of ~200,000 tonnes. Subsequently, Televisory foresee a global GE manufacturing capacity expansion (mostly UHP grade) by 25-30% in the next 2 years.
However, availability of needle coke (the key raw material for GE manufacturing, the supply of which is controlled by few players) remains a significant balancing variable in the demand-supply equation. Traditionally, needle coke supply and its prices were controlled by few producers and GE manufacturing industry was the price taker. Televisory expect needle coke prices to imitate the surge in GE prices and supplies increasing but will remain in control as needle coke manufacturers will not compromise on their bargaining position. There is also a possibility of a shift in contract booking from pre-agreed volume and price to a pre-agreed volume at spot price for both the needle coke and GE.